Ladies who lunch - this title has never applied to me before; however with a reunion of old school friends on the books and a need to fill our bellies elegantly, but without the usual 'Ladies Who Lunch' price tag, we popped in to The Northern Quarter Restaurant for the Sunday Lunch menu. 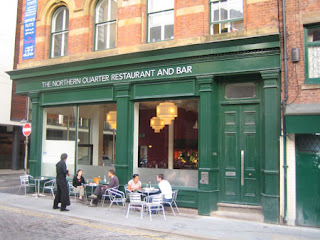 The Northern Quarter Restaurant - with thanks to largemanchester.com

The Northern Quarter Restaurant has been a Manchester stalwart for the past few years and has been one of my favourite places to eat: good, local food presented elegantly and artistically - so you can imagine how much I wanted to show off my find to my old friends.

The Norther Quarter is a mix of classic restaurant and funky minimalism, rather like the part of town it's located in - a mix of up and coming young professionals, arty somethings, Icon-reading design fashionistas and tramps. TNQ serves 'gutsy fresh food whilst using prime local ingredients with added flavours of the med and beyond' and styles itself as 'funky but not frightening.' Question was, would the meal frighten us?

We took advantage of the Sunday lunch menu - £11.95 for two courses, £14.95 for three and ordered with anticipation; however we were left hungry and waited a good 30 mins for our starters to come out. If we hadn't been bowled over by them, there would have been words. 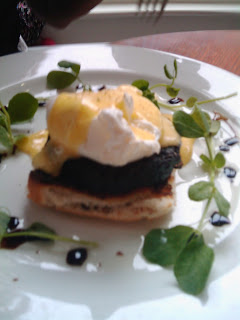 My squid panzanella salad was heaven - a classic marriage of soft tomatoes, well cooked squid, tiny but potent basil leaves and slightly soggy in a good way bread - each mouthful was a burst of flavour on my tongue and I was genuinely delighted. Burlesque Dancer's eggs with black pudding skipped out with a perfect poached egg paired with a brilliantly made hollandaise (which she was cursing whilst slipping in to her skimpy show outfit later that evening). 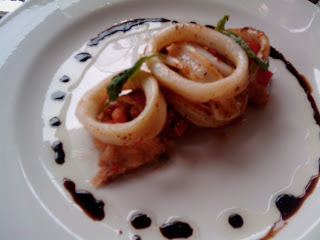 Thankfully there wasn't too much of a wait for the mains - long, but quicker than the starters, I think the wine kept us happy - well, we were ladies who were lunching!

Young Student and the Welsh Harpist had gone traditional style and ordered the roast beef - nothing on the plate was wrong apart from the slightly overly fatty rib eye (yes I know it's fatty, but this was a little more than you would expect), however there was nothing exciting about the dish and it only ticked boxes for being large and warm and Sundy-ish. 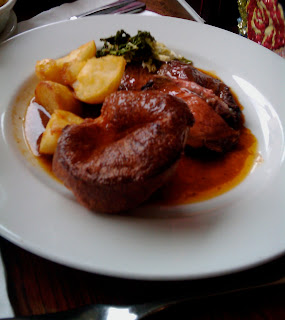 On the other hand BD's and my bourek with cucumber salad was yet another tongue tantalising delight with crisp pastry, tasty filling and a zingy refreshing salad that cut through the creamy filling. The only problem with the dish was that it was a smaller size than my starter (which wasn't the biggest). Ok if you're going on stage in a bikini in the evening, not so good for anyone else; especially when cocktails would feature heavily after we left the restaurant. 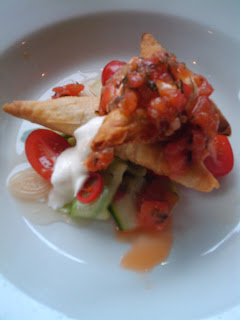 If the food was hit and miss then the service was dire. Usually service at TNQ is swift, sleek and very knowledgeable - but we were left lacking for any attention. Catching the eye of a staff member was like catching Katie Price at a Women's Institute meeting in a twin set and we were left waiting for what seemed like an age for anything we asked for. I'm a fan of continental style lunches, but even if this is a modern British restaurant with Mediterranean influences our two course Sunday lunch lasted three hours - with 30 minutes involving us having to repeatedly ask for the bill.

And when the bill came? I am disgusted to report that TNQ has started to add a 'discretionary' 10% service charge to the bill, nothing cheapens a place more in my opinion - I don't like being told or 'reminded' to tip, I'll tip when I think the experience is worth it. What did we do? We were terribly British and just paid it; no one in Britain likes to complain unless it's afterwards and on a blog.

Where once I was singing the praise and hailing TNQ as a Manchester gem, I am sorry to report that the food from Anthony Fielden's kitchen has gone downhill and the service has left the piste altogether and fallen into a drift from which it can't get out of. For the price we paid, the food was of an alright standard, I just wouldn't want to eat there full price these days - and the service: it wasn't worth anything.

PS - I returned a week later with Little Brother to give TNQ a second chance and have to say the service was just as poor and the food lack lustre, even the panzanella had become overcooked, terribly awful, tasteless and a lot smaller.