Teacup has been serving vegetarian fare, cakes and coffee to the trendy young hipsters/hungover heads of Manchester's northern quarter for the last couple of years. Originally called Cup (against the wall) it was not only a tea and cake emporium, but was a place to pick up select vintage china, LPs, Mr Scruff-obilia and funky t-shirts (Teacup is owned by Manc DJ Mr Scruff).

However times change and Cup has now become Teacup, the walls and floors have been painted brown, you can no longer buy cups (apart from Mr Scruff mugs) and the trendy t-shirts and vinyl have made way for ever more tables as the need for cakes and coffee in Manchester's northern quarter grows - though the Mr Scruff-obilia is still there is full force.

Teacup gets very busy and it can often be a struggle to get a table, especially at about 12 noon on Saturday when the trendy hipsters have crawled out of their Urban Splash studio flats, fallen into some very-trendy-without-being-trendy clothes and finally opened their eyes and smelt the Tea(cup). 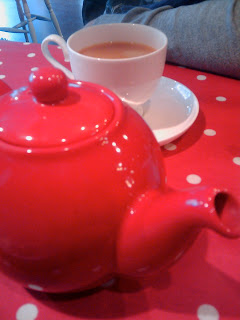 Cup of tea for one

I have to admit it was in this state that I stumbled in to Teacup; however I first had to endure the boy's erratic driving from my parochial hillside village. To soothe my innards I ordered the Superfood Porridge made with proper milk (don't even get me started on the ethics of soya) and a side order of blueberries. The boy made a usual beeline for the organic Dippy Eggs and Soldiers and a fresh orange juice. 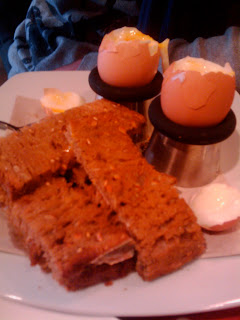 Service was a little slow, though we were in no need of rushing - two of skinniest hipsters I have ever seen seemed to have ordered the whole of the menu just before us, which took up all the kitchen staff - or so it seemed (surprisingly they finished it all too).

The porridge was good; properly cooked, no lumps and the berries made a brilliant contrast, their sharpness cutting through the soft cream and sweet agave syrup with ease. The boy's dippy eggs were soft and unctuous with no watery bits of uncooked egg, though the norlander rye soldiers (from trendy local bakery Barbakan) had gone a little mushy - this seemed to be more from the amount of butter on top rather than anything else. 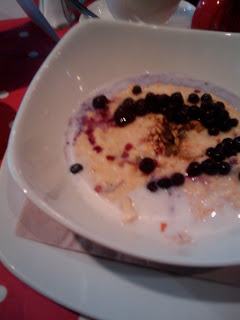 After a stressful day in Manchester town centre, a late lunch saw me back once again at Teacup - more on the request of little brother than anything else. Needing to feed the beast in my tummy I opted for the Soup and Sandwich combo, little brother just had sandwiches as did the young architect.

The beetroot soup had a brilliant horseradish kick, but came out a little cool from the kitchen. The sandwiches on the side were very generous, but so I expected it to be for the £7.50 I was paying. The falafal sandwiches that accompanied the soup were the best sandwiches I have ever tasted - little mint leaves combined with spicy jalapenos freshened up the whole carb/legume overload and lifted the whole affair. 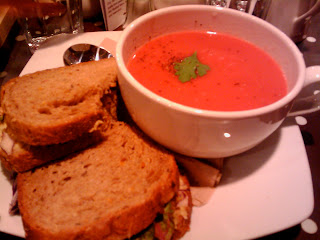 Compared with the fantastic falafal sandwiches the young architect's Sheep's Cheese sandwiches were a bit of a sorry affair. The red onion marmalade couldn't be identified at all and neither could the spinach, the amount of cheese was far too much for one person to consume and the sandwiches must have been sitting on the pass for an age as the cheese had set and become rather rubbery and tasteless - for £3.95 we would have expected more care and thought. Mother's Tomatoes and Mushrooms on toast was flavourful with crisp toast, but at £3.85 the portion was really small. 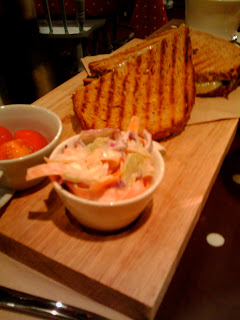 To cheer up the young architect we chose to have cakes and coffee afterwards. Teacup's Hungarian Seed Cake is a masterful dense affair full to the brim with poppy seeds, however I have had this cake before this time the candied peel seemed to be missing from the slice I had and it was worse off without it, there was no freshness or fragrance to the cake.

Little brother's brownie was a moreish and dense slab, the texture contrasting brilliantly with the inclusion of crunchy roasted hazelnuts. The young architect was in for another disappointment with her vanilla cheesecake, which was overly stodgy and sickly sweet. Seeing as each slice had cost us £3.50 on top of what we were paying for lunch, we were now feeling rather out of pocket. 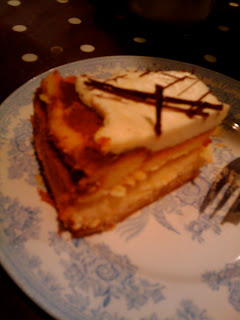 Breakfast had been a great affair and apart for £3.20 for a small glass of orange juice was really good value. On the other hand lunch was much more pricey and for what we were served, not great value at all. Especially bad value at Teacup are the cakes, juices, milkshakes and smoothies.

Whilst Teacup is ticking all the boxes in terms of style there seems to be some massive holes in the value and the taste departments - maybe like many frequenters of Manchester's northern quarter style is more important than substance.

In all I will return to Teacup, mainly because they have the best porridge in town and the boy loves dippy eggs probably more than beer or suet (I know!). Plus the coffee is better than most places, they serve organic local and free-range wherever possible, the service is very friendly and the breakfasts (minus the juices) are very good value. I would think twice before popping back in for a piece of cake or lunch as I think there are places that offer better value for the type of food served.

N.B. Teacup is starting an evening menu of meatballs (veggie and meat) on Thurs, Fri and Sat evening after 7pm.