Last weekend I lost my virginity, that of the supper clubs that is and was lucky enough that my first one was a launch event for JoinUs4Supper at the North Star Deli in Chorlton. 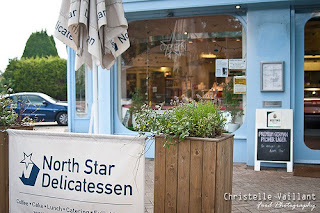 North Star Deli - with thanks to the wonderful Christelle Vaillant, ace photographer and foodophile

The theme of the night was local food - as anyone will know I'm an avid supporter of local produce, local suppliers and few food miles, so this was right up my street. And the fact that I had won a ticket to attend was an added bonus (I never win anything so it really was an added bonus - tho somehow I ended up paying half for the the boy's ticket as well...not sure this is how winning usually works).

Arriving early we were greeted in the warmest manner by staff and other diners who had just arrived. The delightful aspect of a supper club is that once you're all in the door's closed, you're sat with people you may not know and you're all there for one thing - good food. I suppose the atmosphere is the same as in a liferaft, you talk to those you are unfamiliar with and weather the good times and the storms together. Thankfully there were no storms at North Star, unless you count the tsunamis of taste that assaulted by taste buds at every step! 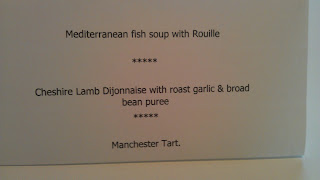 North Star Deli is bright and fresh; white walls with clever signage, products on display and spaced apart tables. The feeling is welcoming and fresh; would sooth a hangover or perk you up on your commute to work (conveniently they are right next to the shiny new metro stop).

First course was a Mediterranean fish soup with rouille - the fish was supplied by local monger 'Out of the Blue' who are all about sustainability (soup included hake, pollock, clams and mussels) and spanking fresh, good quality produce. Support local and pay them a visit! 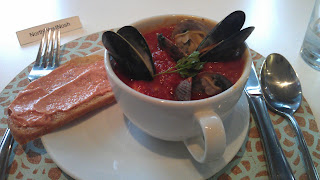 The fish soup was thick and tomatoey, really reduced and full of flavour. Thankfully sweet and not at all tinny (as some over reduced tomatoes can become). Packed with large lumps of fish this was as much as I'd usually eat for my dinner and it was only the first course. We were warned by chef Deanna that the rouille that accompanied the soup would blow us away (one chef wouldn't taste it as he had a date later!) and she sure was right. However the rouille was sweet and mellow without the harsh, metallic garlic twang that is characteristic of something under prepared.

Mains followed shortly with an introduction by local butcher Lee Frost; the boy was over the moon as not only was he sitting next to him (Northern men bonding over meat talk=good), but the lamb on the table had been slaughtered in Oldham. Lee knows his stuff and was really engaging, he explained the cuts of lamb being served, provenance (Cheshire) and other meaty facts. It was great to be able to meet the producer and heartwarming that North Star invite the suppliers and make them a central part of the evening. 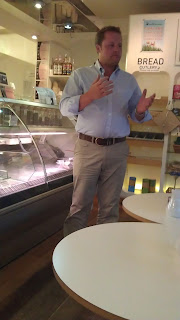 The lamb itself was cooked amazingly - well rested, meltingly tender, beautifully seasoned Dijonnaise crust and the quality of the meat shone through. The garlic and broad bean puree served alongside complimented expertly, singing with the sweet notes of the lamb. 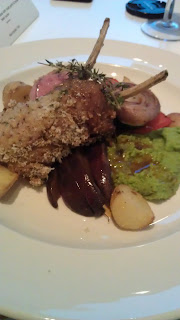 What was pudding? Well what else could it have been on a local food night? We were served magnificent slices of Manchester Tart with vimto sauce. The team had the foresight to lighten the serving and used an almost liquid creme anglaise rather than a set custard. This was cut through with the addition of the new season's sharp raspberries - yum!

All this was followed up by some of North Star Deli's famous coffee (rich and fruity) and THE best salted caramel macaroons - so squidgy and delicious! Luckily the boy didn't like his so I got two, bliss. 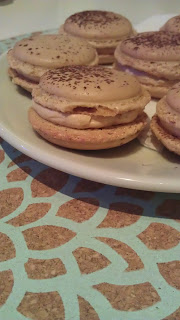 Maccaroons of doom - get some today!

North Star doesn't only do wonderful supper clubs featuring the best local produce and suppliers, they're also open from 8am everyday to sell you coffee, cake, teas, lovely food, smashing products and wonderful teapots. They're also right next to the new Chorlton metrolink, so all you townies can easily sample the delights.

I managed to grab a quick word with chef Deanna Thomas (who owns North Star with her brothers):

How come you set up the supper club?
We’ve become fascinated with social media and how the food world has embraced it. It’s been a perfect platform for the supper club movement based primarily in London but filtering outwards. Despite Manchester being the second city in terms of social media, we’ve been relatively slow on the uptake in this area. The Spice Club has been doing a wonderful one for a while now and there are monthly gourmet events such as Gastroclub, Guestrant at Elektrik and Gourmet night at the Mark Addy. Our deli can seat 30 people comfortably and is available for events in the evening so we thought we’d start a supper club with a different theme every month.

How did the supper club start?
I did a tester on St Patrick’s day in March and it worked really well. Lots of different people including food bloggers came to meet and chat and there was a really unique atmosphere you don’t get in restaurants.

Why did you choose local food as your first theme?
We feel very privileged in Chorlton, people here are really supportive of local independent businesses and smaller events. We love the way we were so welcomed back in 2003 by other local businesses and we wanted our first event to recognise this.

As well as coming from a long line of butchers, Frost is an expert in his field and a very funny man which made for a great evening. Sustainable fish is a hot issue at the moment and we wanted Dave from Out of the blue to come along and champion some of the lesser known fish and give us some advice on buying and cooking seasonally. Unfortunately he couldn't make it, but we're sure he'll be at one in the future!

And finally why is supper club important and what does it offer that other restaurants don't?
Supper club is one thing that can be done by independents rather than the big bully supermarkets.


North Star Deli's supper club runs every month so follow their blog/site/twitter/facebook to find out more.

Supper club tickets are priced at £25pp for three courses - if you book early you get petis fours and coffee thrown in too - bargain!