I’m in fear of shocking you readers, but there’s something to be said about the North West’s dining scene; if you only eat in the cities because you 'know' you're guaranteed the best food, then you're getting a raw deal - the best food, the best service and the best prices are all found outside town.

I’m going to propose a theory; no matter the quality, a city restaurant it is always guaranteed custom as long as it's cheap enough or flashy enough. There’s the footfall, the tourists, the convenience, the being part of a scene (ad nauseum) and these factors ensure bums will be on seats and food will be in mouths. (Seems many restaurants in Manchester are surviving very well on just being flashy; but that's another rant and another blog).

Take an eatery out of the city and suddenly things change. There’s no guaranteed footfall bar a few pint seeking locals, so quality suddenly becomes very important; as does reasonable prices and staff that are capable of serving rather than just looking good.

One such place proving this theory is the newly refurbished Chetham Arms in Chapeltown on the outskirts of Bolton. Nestled away in a quintessentially small Northern village, it has been taken over by the powerhouse that is Chris Yates. At the tender age of 24 he already has two very successful ventures under his belt (Elephant and Castle, Shoulder of Mutton) with a raft of awards to boot and an inclusion in the Relish cookbook, along with such luminaries as Robert Owen Brown and Andrew Nutter. 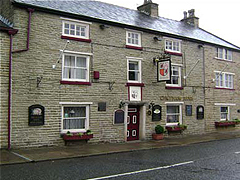 The Chetham Arms - with thanks to themselves

The Chetham Arms doesn’t look anything special, in fact it looks like a local that’s had a little bit of a makeover in the main dining room; nothing stuffy or over pretentious. The staff are very welcoming and there’s plenty of good ale on tap. Even the menu is unassuming; filled with local produce and hearty sounding dishes: it doesn’t give an inkling of what’s to come.

A soup of jerusalem artichokes was rich and velvety without being overpowering; the accompanying truffle cream added a heady perfume that matched with an earthy brilliance. The cream had been foamed slightly and this added a lightness to a dish that could have suffered from being far too heavy. 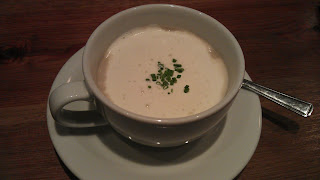 Isle of Skye scallops were sweet, caramelised and cooked to perfection - nothing rubbery or anaemic here. I’m not one for foams when they’re just ‘there,’ but the addition of a smoked bacon foam added a salty punch that brought the dish together amazingly well. 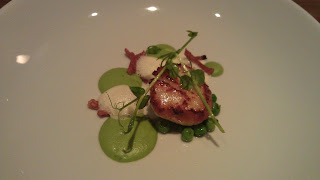 Isle of Skye scallops - yes, this was served to me in a pub! (pint just out of shot)

Homemade black pudding with quails egg came with a moreish pineapple relish and julienned sour apple slices; a quirky slant on a well known food pairing. An accompanying fritter was light with no hint of grease - a testament to the chef's skill and one which added a lovely crunch to the dish. 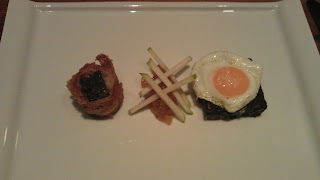 For mains we had burger, it would have been rude not to whilst sitting in a pub. The patties were amazing; not too salty, not too greasy, not too bland, not too much bread. Everything was spot on with this dish; from the handmade ketchup (heavy hints of star anise) to the onion relish, to the home picked onions to the toasted muffin and it was served pink to boot. Perfect! 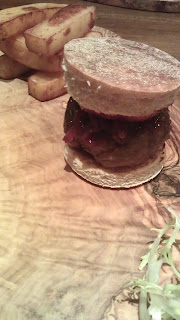 Finding space for pudding was hard, but after the quality of the proceeding dishes we reasoned we should try and find space. Rice pudding and treacle tart were very well constructed, but the most amazing pudding was the simplest – a raspberry parfait with orange rind compote. I’m not sure how the chef had managed to create such intense flavours, but the small quenelle packed a massive punch of fruity flavours -  the balance of sugary sweetness and the underlying tartness was just right, leaving you neither sugared out or pinched in the mouth. 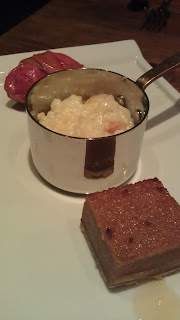 Usually in an evening there is always a bum note or some aspect of a dish you'd change. At The Chetham Arms the composition of each plate that came out was perfect; obviously Chris Yates has thought long and hard about each and every aspect of each and every dish; ensuring texture, taste, look and smell were balanced and come together to create a harmony not often found in restaurant food, let alone pub food. ﻿

The Chetham Arms may be a simple pub with good, honest grub; but the high standard, creativity, skill and reasonable prices means this is likely to become a definite go to destination and proves that out of the city it's the food, service and price that does the talking.

Ps - I try not to go to the nth describing every dish or go in to raptures of delight on my blog, however the food at The Chetham Arms was so surprisingly good and priced so extremely fairly I'm sorry, it was needed this time!

Price for taster menu and drinks: £34.60 – as The Chetham Arms is newly opened the staff gave us a small taster menu for the same price as the three course market menu (13.95 for three courses lunch time and 5.30-7pm Mon-Fri).

Go again? Yes, we have already booked to have Christmas Eve there and will go back time and time again.