There's a lot for me not to like about Almost Famous Burgers - the fact that there's no reservations (I'm lazy and hate queues), you have to be on Twitter to know where it is, they have a statement saying no bloggers , they don't let you take photos (not like this is all a clever marketing ploy or something...), and the word 'nom' is on the menu. It's actually in the title of one of the burgers. I don't like the word nom. End of.

But the lure of good quality burgers was too much for me; so despite my initial reservations and the large list of 'why I would probably hate its,' I found myself outside a nondescript door in Manchester's Northern Quarter early one Saturday evening. Pushing through the door like delinquent children at a derelict factory's gates, we found ourselves walking up some stairs through offices, all the way up to a door with 'No Photos' emblazoned on it. It's not a conventional entry so don't be scared off by thinking (in their words) 'What the frick is this?!'

T'boy and I pushed the door open; a very Alice in Wonderland moment as  we tentatively peered round not knowing what to expect, our eyes taking a moment to focus and then we were greeted by a large, white rabbit in a waistcoat - sorry I mean; welcoming barmen with friendly grins, a cocktail class at the bar and various 20-somethings mooching around, choosing what to eat.

We went through to main eating area; which is white, bright and high ceilinged with wonderfully cheeky prints on the walls - not somewhere you'd expect to be serving up an all American menu; but a lovely space that made you concentrate on the food and not some kitchy route 66 decor - and what food!

Almost Famous concentrates on two main things - burgers and chicken wings. The menu's short, a selection of burgers with different toppings, three types of wings and some fries. As t'boy commented "it's a good sign, means it'll be good." And his sentiment rang true with every bite we took. 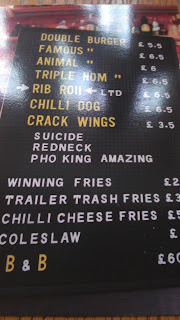 Our Almost Famous burger was served almost pink (finally, somewhere doing this...); a fat juicy patty in a sweet brioche-type bun, covered in cheese, special sauce and some greenery for freshness and fun. I am going to put it out there that this might be the best burger I have ever had. It's definitely the best one I've had in Manchester.

The burgers are brilliant, exceptional and totally moreish, but it's the chicken wings I'm going to bang on about. Called 'Crack Wings,' I can now see why they have been given this title; I don't usually like chicken wings, but I had to have extra portions - I don't know what's in them sauces but I couldn't stop. The Redneck sauce is definitely the best - spicy without killing your taste buds, heavy on the BBQ, immensely yummy. I licked my fingers for the next three hours - I was at a gig, people looked at me strange, I didn't care.

Despite all my reservations around Almost Famous' clever marketing ploys, on trend Charlie Sheen style winning talk and social media faux secrecy hype; I have found somewhere with the most unpretentious of welcomes, the best burgers and wings in town and deep down I really liked pushing open that anonymous door that could have lead anywhere, the butterflies in my tummy as I walked up the stairs and the fact that I'm now in on the secret.

Go again? Frick yeah! Although I'll have to be quick as they're only going to be open for the next few weekends (they only open Fri and Sat from about 4pm - midnight, though check out their Twitter for more info).

Almost Famous Burgers, Anonymous door in the main part of the Northern Quarter, Manchester. (Like I'm going to tell you where it is - check out the website and twitter to find out more).

Ps - sorry for the lack of photos, I took one of the menu and then chickened out like the massive girl that I am.

Pps - Check out the tiles on the main staircase up, amazingly beautiful.