Spinningfields - once an office surrounded wasteland full of commuting suits and empty units, has been undergoing a bit of a transformation lately, in an attempt to inject some soul into the corridors of corporate Manchester.

Now teaming with a mix of upper-end chain restaurants, funky pop ups, an outdoor cinema and even a frozen yogurt place; it's become the go to destination of the bright and spangly young professionals, keen to drink away their weekend and flash a little cash whilst they're at it.

At the top end of the scale is Living Venture's Australasia, an underground doyen that's so stylish and slick they're thinking of using it as the new teflon. For an underground bunker, Living Ventures have done exceptionally well - it's bright, light and well designed without feeling like you're sitting under 1,000 watt lamps; even though there's a profusion of tightly packed tables, the space feels intimate but not like your neighbour is spying on you. 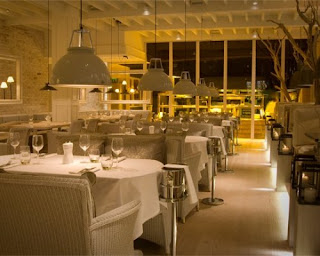 Australasia interior - with thanks to Restaurants of Manchester

As you can guess from the name, Australasia's premise is the fusion food found in the city restaurants of Melbourne and Sydney, but most of the menu is very Asia heavy - sushi, tempura, a robata grill etc. As we were there for snacks and chats with drinks, we stuck around the sushi end of the menu so we could all share.

Unfortunately for the food it seems as overly styled as the restaurant - it's beautifully presented and minute attention to detail is paid to everything bar the taste (I know this as they have a glass walled kitchen and a legion of chefs doing very fiddly things to plates on the pass). Don't get me wrong, it's somewhat better than some of the food you find in Manchester, but for the prices we were paying I'd expect it to be AMAZING or something like that.

Oysters were great, very fresh with all the liquor still in them and the accompaniments worked a treat, but I'd be seriously pissed/worried if they managed to mess up an oyster. Next came kingfish sashimi; didn't taste that fresh, almost spongy and at £15.50 was a tiny portion - I don't care if it does come from Tasmania, I was hungry. We moved on to scallop sashimi with a sweet lime dressing; sweet scallops with a caramelised chillies and crispy shallots - could have done with that aforementioned lime juice to lighten it a little, but the dish was good enough for me to let it slide this time. 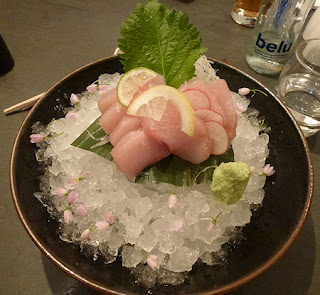 Kingfish sashimi - with thanks to Restaurants of Manchester

Soft shell crab California roll was dominated by the sesame seeds on the outside, no hint of what was on the inside at all; the tuna and crispy shallots tasted of cheese and onion crisps, no hint of the fish. With both the roles the rice was awful; really overly claggy and not a great texture at all. Just as we grumbled and moaned we were saved by the smoked ell nigiri - seriously the best I have ever tried (I adore unagi like Baltimorian's adore their drugs); soft, salty, sticky and smoky with the exact amount of wasabi to balance it all out - yes the rice let it down, but the fish was so good I didn't give a flying...

At that point we'd had enough of the over priced, over styled food; plus we were distressed at the tap water we'd been given that had an overpowering taste of 'gentleman's relish' (I'm not talking about anchovy paste here), so we scarpered, leaving the bright lights of Australasia to Manchester's shiny young things.

Go again? If I wanted to overly impress someone who didn't like food and they were paying, maybe. Shame as the restaurant itself is really lovely, the food just lets it down.

Ps Sorry for no photos, got carried away with the oysters and booze on this one.