Pancho's, a small stall that has stood in the hustle and bustle of the Arndale food market, first caught my eye with it's gaudy yellow sign and queues of burrito buying lunch-timers, last year - back then it was one tiny little stall; the Mexican husband and wife team run off their feet churning out never-ending streams of Mexican street food. Now they've got two stalls and are fast becoming a firm favourite in the food hall. 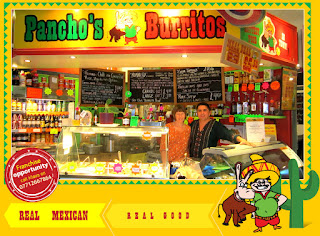 Eye-catching and tongue tingling! - Thanks to Pancho's

Pancho's makes the best burrito in the whole of Manchester and probably in the whole of the North West and maybe even in the UK. I recently had the pleasure of trying some North East burrito styling at Street Chef in Sheffield (they're missing a trick not calling it Street Shef...); very good (blog post soon), but still only on a par with Pancho's.
Hands up, you guessed it, this is a blog post from a bona-fide burrito fan - when Barburrito was initially alright and my taste buds weren't so...ahem...sophisticated, I'd make a weekly trip there. This was shortly followed by a burrito-cational few visits to the big smoke, where I tasted something closer to what I guess is the real deal (if anyone wants to take me to Mexico to taste the real deal, please get in touch) and since then I've craved a burrito roughly once a week. Thankfully Pancho's has been there to quench my thirst/hunger with this carby, meaty, zesty meal in a wrap.

If you crave a burrito please never visit Taco Bell in the Arndale food court.

In fact why does the Arndale bother providing the food court? Especially when you can walk approximately two minutes, indoors, and come across the delights of the food market? Maybe to keep the crowds away so I only have to wait behind five people for my burrito instead of ten?

Anyway, I digress, this is a post where I big up Pancho's and don't philosophise on the whys and wherefores of Arndale management.

The Pancho's burrito is a massive affair - I go for the smaller size and it's still massive. There's a revolving list of fillings, depending on what's been cooked that day by the staff; the filling are all very traditional (in a good way), rather than the crazy rat balls and smoked pig face concoctions you're likely to get in some 'street food' places these days. 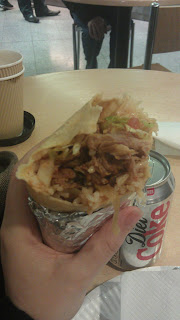 Ripped open - look at all that filling!

If Pancho's have the pork in chipotle as an option, I implore you to have this filling over anything else. Whole bits of pork are slow cooked in a smokey, tangy sauce with a bit of a kick - it's sweet, it's spicy and it's lip-smackingly delicious. The pork with cactus is a pretty special affair too; lighter, but with an insane depth of flavour and great texture from the cactus - and you can't get more Mexican than cactus.

Along with the meat (or veg, if you're that way inclined/mental), the burritos are stuffed full of salad, beans, peppers, rice, cheese, sour cream and salsa (I always hold the cream and cheese, but that's a personal taste thing). The salsas are made fresh and shower you with an abundance of fresh, fruity flavours that cut through the carby, meaty, creamy burrito - word of warning, the hot habenaro will blow your head off (and also makes your lips majorly plump up, so a good choice if you're in need of plastic surgery but can't afford filler injections).

"This place sounds divine," you're thinking. But it gets better (really?!) - Pancho's staff freshly make salsas and sauces for you to take home (the chipotles in adobo saves you a hell of a lot of work and makes the base for the best huevos rancheros EVER) and they stock a wide range of dried Mexican chillies that are a) hard to find or b) that you usually need to be ordered specially online. Oh and mentally hot sauces, if you like that sort of thing. And (proper) tequila - but don't getting that if you have to go back to work.

Pancho's is a great place for lunch - don't got to Boots for some over-processed meal deal - for a quid more you can get a filled to busting (seriously, I don't know how they get all the fillings in without breaking those wraps), freshly made, authentic, flavoursome treat. And there's tables to sit at in the market too.
Pancho's Burritos, Food Market, Manchester Arndale, High Street, Manchester M4 3AH - Facebook - Twitter - www.panchosburrito.co.uk