I don’t drink tea. I didn’t drink coffee until three years ago, when my Dad forced me to drink espresso and eat pastry every morning, when I went to visit him in Italy – it’s ok, I’m a grown-up girl now, it’s not child abuse.

However, since that nerve jangling, stomach griping week, I’ve been getting gradually more and more hooked on the black stuff; there’s a three types of coffee pot in my kitchen, a cafetiere on my desk and I can give you a run-down of the best places to drink coffee in Manchester city centre based on distance from my office/opening hours/coffee styles/cake crumbliness.

Somewhere that’s popped up on my radar in the last few months is Caffeine and Co – I quickly added it to that ever-increasing ‘must try’ list, but I’ve always been too busy/away/running because my train’s delayed, to actually stop by and give them a go.

Why didn’t I go earlier? I don’t know (shakes head at self). Classifies as a true Nosh fave this one – hidden gem, quality coffee, homemade cakes, passionate owners…. 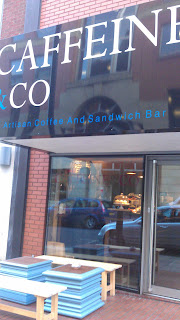 Popping in to the snug little cubby hole on St James Square (off John Dalton Street), you’re hit by the warm coffee fug and a veritable smorgasbord of tempting cakes and bakes crowding on to the tiny counter. There’s a couple of bench seats if you’re feeling lazy and want to eat/drink in – or you can get a take-out with an extra dose of friendliness. 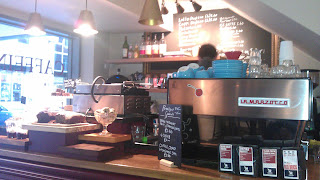 Caffeine and Co was set up by Claire and Phil; having spent time in London and Australia, they keenly felt the lack of good quality, coffee shops in Manchester, which concentrate on their bean blends and growing a steady stream of regulars. Realising that the Northern Quarter had one or two very fine establishments already (especially the brilliant North Tea Power); the reasoned they should give other parts of the city centre access to a proper cup of joe. Wise move as they're now on my way to work...

Sourcing their beans from an independent coffee seller in London, they’ve created their distinctive house blend; which is a slightly sweeter, floral, lighter yet complex drink (you don't need sugar for this one). The beans are always fresh and if you can’t get enough of their coffee, you can buy a bag to take home with you. 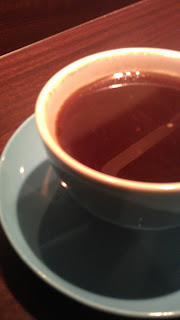 Proper coffee - put down your mass produced, watery awfulness and go get you one of these

I’m a black Americano girl (as colleagues have banned me from drinking espresso/ranting for half an hour), but there’s more choice than that here! Caffeine and Co have a small, yet perfectly formed list of drinks (try the cortado, a half espresso, half milk shot); but they’ll make you anything you want if you have a hankering for a specific style of coffee.

Cakes are all homemade – you can definitely taste it. Stacked up on the counter, it can be a little daunting to choose, but their ginger cake is light, yet deeply complex – and they make it ten times better by serving thick slices of it smothered in rich, salty butter. 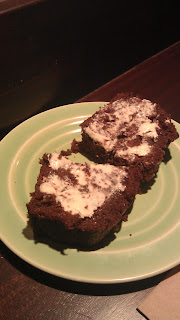 You may be rushing about; stressed from the commute/late for a meeting/dreading the presentation you have to give, but take five minutes out, swing by this little hidden gem and start your morning the Caffeine and Co way.

Ps Keep an eye on their Facebook and Twitter to see which delicious cakes they will have on!

Pps There's rumours of big plans for Caffeine and Co, so keep your ear to the ground for news, SOON...


Please note, I was given my food and drink for free – but as you know, I’m under no obligation to say anything nice.