Unlike swathes of my friends, peers and fellow mancunions, I had yet to have eaten at Cicchetti, the latest (though not that new now! Get with the times etc! - ed) offering from the San Carlo group.

Part laziness, part skintness and part 'every-time-I-go-in-the-service-is-appalling-and-I-leave-before-I'm-seated-ness', has kept me away. Till now. Because we were very hungry and mother was paying.

Packed, even on a rainy mid-week lunchtime, we were asked to wait at the bar; we ordered a coffee, we watched the world pass and this time, we were treated with impeccable service. The relaxed opulence, the hurry-scurrying of the waiters and the fact everyone seemed to either be speaking in Italian (staff) or to be extremely tanned (well-heeled customers), made us feel 'like us on us 'olidays, in Italy, like.'

﻿ Cicchetti's premise and inspiration, is the cicchetti bars of Venice; where small plates are brought out with drinks, tapas style. The menu is quite vast and I could have happily eaten most of the dishes on there – however we were advised that five between two would probably satisfy (and they were correct, pudding was noted to have 'pushed us over.' Mother was smug, she didn't eat pudding).

Despite sitting in an Italian restaurant and feeling rather continental, Mother and I bickered in the most British of fashions, suggesting dishes and immediately deprecating said suggestion in favour for anything the other suggested. Luckily I went back five days later and ordered all the dishes I'd conceded.

In the end we settled on the Goat Ragu (this month’s special), a meaty, soft, delicate and satisfying dish with some of the best pasta I’ve eaten (family gossip, my little brother has started making his own pasta) and the best dish of the day (we may not have agreed on which dishes to order, but we both agreed on this important fact). 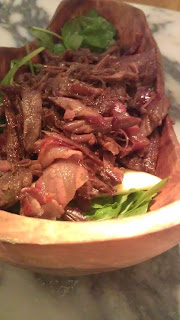 We also chose the buffalo mozzarella with tomato; a very small dish, but the sheer amount of flavour, seasoning and quality made up for it. There were butterflied sardines on toast with a caper and roasted tomato sauce, more capers were needed in my opinion, but Mother was happy as she hates them (this was a dish she had conceded to me, her special spoiled princess).

We also ordered the duck and apple salad, expecting more apple than duck, a la everywhere else I’ve ever eaten. Instead we were confronted by what must have been at least a quarter of a duck; super soft and sweet, with peppery rocket and fine slices of sharp apple to cut through the buttery meat.

And then there was the dish of green beans. This could be construed as a boring choice, actually it was my attempt to inject something healthy into the meal. The beans may have been green, but I would guess that at least 200g of butter had been melted over the top of 100g of beans. This is how beans should always be served. Take note.

Quick aside - run down on the dishes I order five days later minus mother, plus friend who I practically bullied into these choices:
1. Terra board - the creamiest, dreamiest mozzarella scattered with slices of charcuterie.
2. Calamari - my 'kitchen competency test' - just cooked, the sweet squid was encased in the lightest, well seasoned batter.
3. Courgette 'chips' - see beans above. Everything that applies to them applies to this dish.
4. Mushroom pizza - anywhere else this would be an amazing dish, but with everything else on the table, this was obscured.
5. Dolce cicchetti - a big board full of puddings, great for sharing, not a patch on affagato (see below). 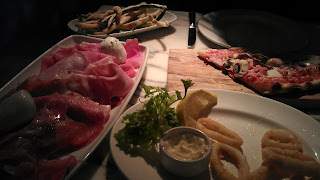 Full, satisfied and utterly charmed by our waiter, we finished on coffee – well Mother did, I had the affagato, because coffee is always better when it super strong, poured over ice cream and finished with a good kick of amaretto. 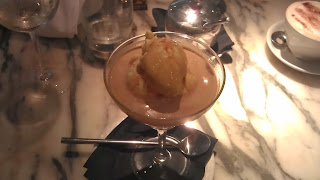 Cicchetti’s a rare place where you can either order a quick, small plate for one at lunch (sit at the bar, listen to the waiters, pretend you’re in Venice and have sunny fantasises before heading back to the office) or sit down for hours, order plate after plate of inspired, brilliantly cooked food and share them with sunny laughter, gossip, wine and friends – and anything in between.


I'm not sure why I stayed away for so long!