Needing somewhere hearty to eat after an evening of helping the Boy in his endeavors, I had stumbled across The Railway at Euxton through my faithful friend Google, and after comparing it with other local establishments was impressed by the website's description; 'our menu embraces our love of Lancashire and its wonderful flavours which is reflected in a wide variety of freshly prepared local dishes made from the finest locally sourced ingredients of the finest and all at very accessible prices.' (Ok, maybe I wasn't impressed with the grammar, but that was by the by).

The Railway Euxton - with thanks to restaurantguide.com

Coupled with the fact that The Railway won the Marston's Food and Drink Awards Best Newcomer 2008/09, has glowing reviews from Taste Lancashire, Sugervine. com and Bitefinder.co.uk it all sounded promising, or so we thought.

Arriving at 7.45pm on a Wednesday evening we were greated by an almost empty dining room, save one couple who were wiping the corners of their mouths after what seemed like a satisfying pudding. The dining room is decked out in classic new gastro pub indentikit attire; leather sofas, soft lighting, wood and teal paint on the walls 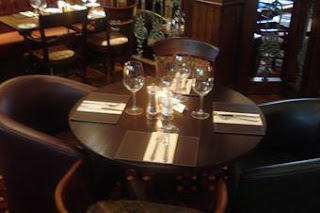 The indentikit furniture - with thanks to beerintheevening.com

After choosing from the vast array of seats we were shown the menu and it really does read like a who's who of quality and recognisable Lancashire producers: Mrs Kirkham's creamy lancashire, Goosnagh chicken, H Greaves of Upholland, Hesketh salt marsh lamb, Walling’s Farm ice cream and so on.

Liking the sound of 'sirloin steak 5 weeks matured on the bone, hand cut chips cooked in dripping,' from the specials board (not very special with only that and a salmon dish on) myself, Best Friend and Mutual Blonde Friend all chose this option - only the Boy chose differently and opted for the six hour braised pork belly.

As we were the only diners now sat in the room the food came out quickly and was well presented, although all three steak eaters were dissapointed with the numbers of chips on the dish, only six to be exact. 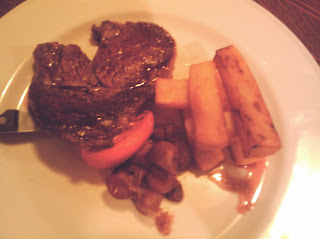 And that's not the only dissapointment we found. I had requested the sirloin medium rare and I was presented with something that was indeed medium (ok, they forgot the rare bit, but I forgave them) and was pink in the middle - however the pink was very bright and the meat, in contrast to something cooked medium was very dry and chewy. I cannot explain this from a well-sourced cut of meat but have come up with three senarios a) they are lying about the provanance and quality of the meat, b) the steak has been pre-cooked and then warmed through in the micro or c) they were using leather injected with dye having run out of steaks in the kitchen.  Indeed Best Friend noted this of his steak, though it was a little less dry – we discounted the Mutal Blonde Friend’s steak as she had requested well done.

The dissapointing chips were nicely flavoured yet a little soft and there weren't enough of them for a hungry girl to fill her belly with and the thyme roasted tomatoes seemed grilled rather than roasted and not done enough anyway, but the hint of thyme with them was very pleasing and I may recreate this at home at a later date (with more roasting).

The one pleasing point of this entire dish was the caramalised baby onions. I don't know where these have been all my life, but now they are very  much in it I cannot stop thinking about them. They were sweet, soft, unctous and gorgeous and very much saved the dish.

The Boy's six hour braised pork belly was good in comparison to our leather strips. The belly was soft, flavoursome and unctious with a good sized piece of crunchy crackling - you could tell this meat was from a quality source; however the only downside was that it was somewhat underseasoned (I'd prefer rather under than over though if you ask me, at least I can rectify it at the table some what). 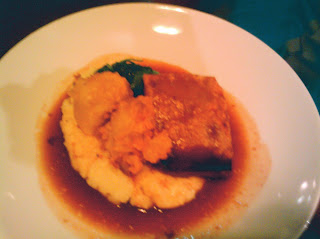 If the meat was great (I'm not going to say fantastic), it was the sides that let this dish down. They weren't awful and for the £12.95 they were asking it wasn't too much a slap in the face. The pureed potatoes were nice (not great, not awful, just nice) but there were a few lumps in evidence and the apple fritters were again nice (that word again!), but the batter was a little soft and had a hint of the frying oil.

To cheer ourselves up after the steak we ordered some ice cream and chose three different flavours each. The ice cream was lovely as ice cream from a good source is, but a very steep £3.95 for three very small scoops served with packet wafers and chocolate straws.

In all the meal was satisfactory; I had massive food envy over the Boy's dish as it was leaps and bounds better than the steaks, however I wouldn't have given up the caramalised baby onions for anything. Had the food been cheaper (the steaks came in at £16.95 each) I wouldn't have been so harsh.

With a list of exceptional producers and a price in the higher range of North West pub food (indeed they are not far off Nigel Howarth's chain including the Clog and Billycock and the Highway Man) the meals we were served should have been so much better than they were. It just proves that although it matters what goes in the food, you can't just rely on your producers alone - it's what happens in the kitchen that really matters and sadly The Railway seems to be just relying on the producers alone

Cost for four mains and two puddings (we bought drinks separately at the bar): £71.70.