Having become something of a Japanophile lately (mainly from copious amounts of comics and Mikado biscuits I have consumed) I was intrigued when the boy mentioned he had been recommended a Japanese restaurant on the edge of Manchester's china town.

The restaurant is non-discript from outside with a slightly garish sign, not the most welcoming. We entered and walked down into the basement, which is surprisingly light for a low level room. The restaurant is small and the tables somewhat basic and cramped, however we had the good sense to book ahead and were shown across the main dining area to the traditional japanese tables at the back. These had been updated for westerners so you don't have to kneel, but the effect is the same as your feet dangle down in to a carpeted well and look like you're sitting at a low table. These tables come with posher chopsticks (woo!) and traditional paper screens. (Wear good socks if dining this way as you have to take your shoes off). 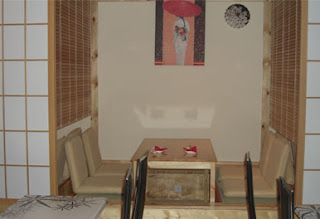 At first the restaurant seemed dead, but by 7.30pm we were glad we had booked ahead as the place was chock full of Japanese - a good sign we thought.

For starters I ordered a miso soup, the boy and an ex-colleague had the sashimi rolls and our new friend went for the edamame.

The miso was miso; warm, salty and full of tofu and seaweed. The edamame were edamame, nothing special, but were clean tasting. To our consternation the sashimi rolls came out as salmon and smoked salmon, although the menu had said tuna. The boy was obviously disappointed at this, but this was made up by the inclusion of cucumber and pickled ginger in the centre, which added a great contrast in texture and fresh, zingy flavours (picture below). 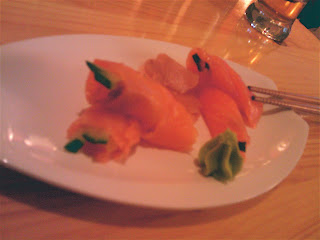 As we had the taste for raw fish we ordered the Chef's Special Shashimi and Sushi 16 piece Platter to come out with the starters. This dish was presented traditionally as a selection of nigri, maki and gunkan, but disappointingly there was no sashimi as promised in the dish's title. 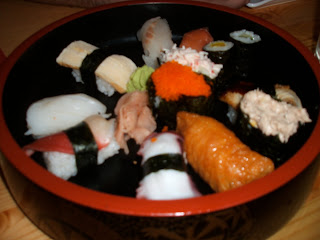 It was refreshing to be served a sushi platter that didn't pander to western tastes, with only one salmon nigri on the whole plate. There was a wonderful mix of seabass, spankingly fresh squid, flying fish roe, crab and others. The only disappointment came from the arctic clam which had definitely come from the arctic freezer and a soggy tuna mayo gunkan.

Mains followed swiftly and these consisted of the Tokyo Season Special Teppanyaki for the new friend, Unadon for ex-colleague, Beef Fillet Yakiudon for the boy and Sashimi Rice for myself.

The special teppanyaki was a mixed bag of various skewered things including very baby squid (they were tiny, it almost seemed a crime to eat them), prawns, beef and what we presumed was eel. Unfortunately the squid and the prawns were terribly overcooked, almost what I presume chewing tyre rubber is like. The beef was soft but unremarkable but the eel was very, very good. The poor cooking of the seafood was, however, saved by the delectable sauce everything had been cooked in.

Unadon was eel cooked in sauce over rice. The eel was brilliantly cooked in a lip-smacking sauce, the only downside being the skin on the eel. This maybe how it's eaten, but I personally like my eels skinned at the skin had gone a little sticky and gloopy.

Sashimi rice was as it said on the tin, sashimi on a bed of rice. Again the selection was varied and I was surprised at the inclusion of Sea Urchin, not at all western and somewhat a luxury for the price of £12.95. This was only marred by the obviously defrosted arctic clam that had reared it's ugly head in the chef's platter. 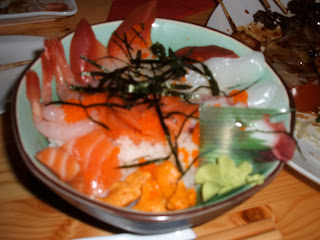 The boy's food came out much later than everyone else's (much to his dismay), if we had not been sharing everything I think we would have mentioned this to our server. The wait was almost worth it - the noodles in the dish were soft and unctuous, deeply filled with the flavour of the sauce and masses of them. The beef though wasn't that great, thin strips were presented in a way that looked like the beef you get from a second rate chinese takeaway - but for £9.50 and being tasty we weren't complaining. 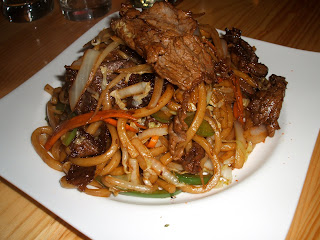 Throughout the evening the service was charming without being over-bearing. We did occasionally have to wait for a server to notice us, but in a very busy restaurant this was understandable and we were always greeted with a bow, a smile and the utmost friendly charm I have ever come across.

Tokyo Season was a good night out with friends, it wasn't spectacular or mind-blowing, but for a  tasty mid-week meal it was fun and we were throughly looked after.