When we moved out of the city centre to the 'provinces' a couple of years ago it was to the mouths agape of our peers; where would we socialise? Where would we eat out? Contrary to their belief it hasn't been an uphill struggle, we've found good places to eat - albeit we rely mostly on upmarket pubs rather than fine dining; but Manchester's restaurant scene wasn't that good for it to be such a marked difference. Though sometimes, just sometimes, I hanker after some good old fashioned fine dining.

In my wildest dreams I didn't think that fine dining would come to Blackrod; a small parish town on a windy hill with a population of 5,300, two chippies, two curry houses and two butchers. But the opening of a new pub/restaurant called Suzanna's may just be the culinary answer we've been looking for.

Suzanna's used to be a grotty pub with a non too salubrious reputation; but now on entering you are confronted with light colours, velvets, leather and chrome; which is a stark contrast from the traditional pub style building Suzanna's is situated in. There's a pub side to the building that serves traditional grub during the day; then ales, cocktails and drinks in the evening. The main dining room is off to the side and has been equally decked out, if not better. Cool creams and taupes, leather banquettes and white linen set a sophisticated tone.

Glancing over then menu underlines right away that this isn't a local pub; there's foie gras, scallops, cote de boeuf and a nod towards the locality; very on trend, black pudding. 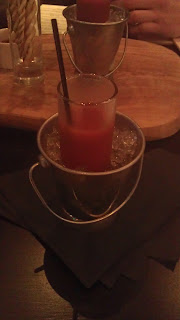 Whilst we drank at the bar we were treated to complimentary canapes. No outdated vol-u -ants here; but some deliciously, garlic heavy gazpacho and the most expertly fried squid I have encountered; light, dry and tender with a good dose of spice; akin to the Dishoom squid popcorn, but far better (I know, in Blackrod!). 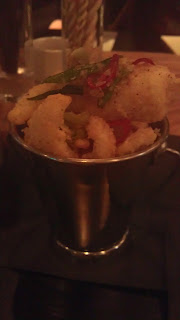 Starter of monkfish cheek with sauce gribiche from the specials menu was a simple affair of a forgotten delicacy (mostly shipped out to the continent now); the fish lightly cooked, the gribiche cutting through the breadcrumbs, which added a pleasing crunchy texture but slightly masked the beauty of the fish. 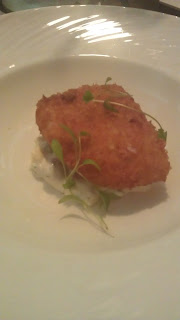 Feeling decadent I ordered the duck with foie gras - this really was a masterpiece of a dish. The duck was cooked bang on the nose, complimented by rich squares of fried fois gras and brought to life with the sharp acidity of the accompanying apple compote. Unlike a traditional apple sauce; laden with sugar, this was sharp, tangy and cutting, livening up what could have been an overly heavy dish. The accompanying dried apple slices were a aesthetically beautiful addition adding a fragrant top note. 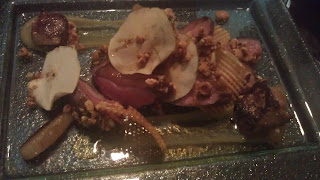 Duck - messed up the presentation as I was so hungry I forgot about the photo!

Best end of lamb was daintily presented considering the size of the portion. Again the meat was cooked to perfection, the aubergine crisps so thinly sliced as to be almost transparent and not holding oil at all, the ratatouille quenelle moist and flavoursome - the only bum note in the whole dish was the over-salting in the fondant potatoes. 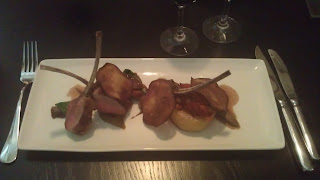 For pudding we picked the assiette so we could sample everything (greedy, us?); a tipsy trifle, chocolate fondant, an espresso ice cream, a carrot cake with sugared carrots, a sticky toffee pudding AND a lemon tart. Each little bite was a burst of well considered flavours and textures on the palate. A special mention needs to go to the insanely perfect lemon tart with the thinnest pastry I've come across since the dear departed Modern. 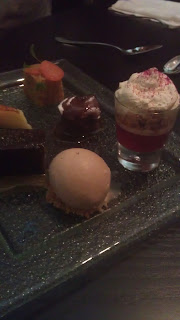 Assiette of dessert - the picture doing it no justice

Each course was a testament to the skill and aptitude of the kitchen, meticulously thought through and well executed. Headed up by Mike Jennings, they are turning out food that equals some of the best in the city centre and blows many of the overpriced eateries Manchester has to offer out of the water. A local lad, Chef Jennings has spent the last ten years travelling around the country working under such luminaries as Gary Rhodes, Nigel Haworth at Northcote and Shaun Rankin at Bohemia; now coming home to bring good food to the sleepy town of Blackrod.

So often in new restaurants you find an excellent kitchen can be let down by poor waiting staff. Seeing as the restaurant has only just opened, the service operation is smooth and faultless. Lead by a professional and friendly General Manager (who really knows his wines) the staff glide through their tasks as if Suzanna's is an establishment with many years trade under its belt.

Granted the food isn't cheap; however for the price you pay here for the blatantly obvious time and consideration lavished on the constrution of well thought out dishes, the amazing service and the relaxed atmosphere, would mean at least another 50% on the bill in the middle of Manchester. At £50 a head for three courses, amuse bouche and wine is a steal.

Hopefully the word will get out about this culinary gem to local foodies and far flung gastronomes alike; convincing people to make the pilgrimage up to my small town, so I, and they, can enjoy Chef Jenning's and his team's wonderful work for years to come.

Ps - the boy asked me to add that they only serve one ale and unfortunately it's served through a chilled tap; not being a beer drinker I don't much understand, but apparently it's crucial!

Pps - if you want something more traditional, the pub does a good range of sandwiches and pub grub from 12 noon-6pm for a very reasonable price; and for all you traditionalists Suzanna's serves up a proper Sunday lunch with all the trimmings too.

Go again - yes, I'll take my parents, my friends, my peers who think I live in a back water, the postman - any excuse!