Located in Jodrell Bank's new visitor centre, with excellent views across to the impressive Lovell radio telescope; the Planet Pavilion Cafe is the latest outpost of the Modern Caterer, a small company headed up by award winning chef Peter Booth, that has sustainability and seasonality as its core. 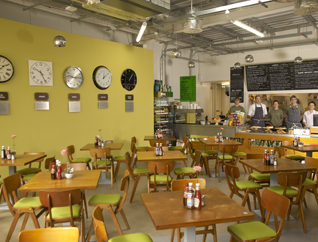 Dominated by the large windows focused on the iconic white radio telescope; the cafe is a fresh, modern space with quirky facts along the walls and lines of clocks displaying various space related times such as the time on Venus and in a black hole (with handy explanations for the non-physicists underneath). There's the ubiquitous blackboard you find in many little cafes with piles of fresh veg underneath and heaps of homemade cakes on the counter. 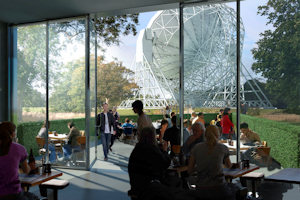 The menu is a mixture of usual lunchtime fare; sandwiches, soups, wraps and whatever. It's was a bustling little space, even on a wet Tuesday afternoon and whilst we were there it was obvious that staff from Manchester University's Astrophysics Department often pop in. And who wouldn't?

Dishes displayed a simplistic elegance and a genuine care for the ingredients involved; the daily special of parsnip soup was creamy yet light, with a sweet whisper of sharp apple underlying the whole dish. Alongside was bread supplied by (fairly) local bakery, Barbakan of Chorlton - and, considering how much their loaves cost, there was a substantial amount of one on the side of the plate. 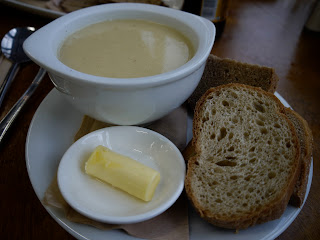 Parsnip soup and loads of bread

Potted Cheshire Pork (the meat supplied by award winning WH Frosts - also of Chorlton) was wonderfully soft and surrounded by the lovely, scrumptious fat and topped with the sharpest slivers of apple - a brilliant essay in why salty, sweet and sour works so well together. Could have done with a little more seasoning, but that was my only gripe. 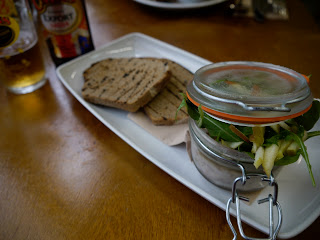 We followed these tasty, simple lunch dishes with a full five minutes considering the distortion of space time round the hefty body of homemade cakes on offer. After much deliberation we chose a light and fragrant orange and poppy seed plus a dense and chewy brownie, which were eaten in three seconds flat; proving the point that space time does indeed slow down and then speed up round heavenly bodies. 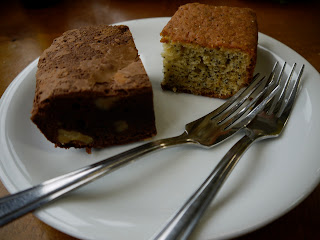 The Planet Pavilion is a great cafe for a museum, or for anywhere to be honest. There's no pre-packaged sandwiches; there's the excellent cooking; there's large portions, there's sensible pricing and there's an obvious commitment to deliver good tasting, sustainable food in line with their ethos rather than simply using it as a catchy and on-trend byline. I wish other establishments would take a leaf from Jodrell and realise overcharging for plastic crap is something that should only happen in the gift shop.

Ps - The Planet Pavilion Cafe also has a licence and serves Cains, so you can calm your nerves if contemplating the universe gets too much.

Pps - you don't have to visit Jodrell to go to the cafe; but I'd recommend it, just for a walk around the massive grounds and to stand by the radio telescope and pretend you're Brian Cox or (even better) Sir Patrick Moore.

Go again? Yes, any excuse for sustainable, well cooked food AND learning about astrophysics. I'm there!