I’m not a lover of veg boxes. As I’m a Guardian reading, left leaning Liberal it may come as a bit of a shock to you, but I find there’s either too much trouble with delivery (I don’t have somewhere or someone to leave it with), there’s too much repetition of produce, there’s far too much produce that’s not from the UK – even when it’s in season, or that the produce is a bit ropey. I may be asking a lot from a box scheme, but I’m a picky old thing; that’s why I write a blog!

Farmison are a new online retailer that have started a box scheme and are approaching things from a different angle. Sure there’s the boxes for families and basic boxes, but there’s an emphasis on good quality, hard-to-source produce; plus gourmet products thrown in for good measure (there’s a foodie box, for those that are that way inclined).

From the lovely marketing ladies I chose the Foodie Box (of course) and chose this with relish – big juicy garlic cloves, beautifully fragrant unwaxed lemons, sticky figs, romesco cauliflower, two varieties of cress, shallots, massive Muscat grapes, yellow beetroot, jura potatoes, cheese and yoghurt. My box arrived quickly and I was heartened to see that most of it could go in the recycling/compost – they’d even used paper straw to pad out the dedicates rather than polystyrene beads. 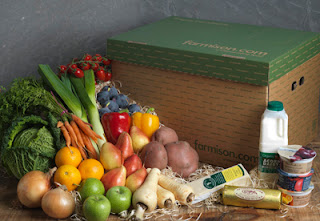 Foodie box with dairy - with thanks to Farmison.com

Opening the box I was like a child at Christmas – all the produce was in peak condition and lasted longer than supermarket produce. However the potatoes didn’t last very long at all and had gone mouldy by the end of the week.

The inclusion of the dairy in the box is a good idea – allowing you to mix and match what you get and add a little extra for your weekly menu. The quality of the dairy products was even better than the fruit and veg. Montgomery’s cheddar was an unpasteurised delight with a rich, almost farmyardy smell and a real tangy bite. The yoghurt was from Preston; thick, creamy and a true delight – it was hard not to eat the whole tub in one go. 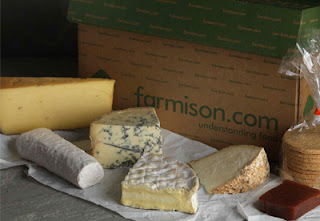 Cheese box - yes, you can even pick your own cheese and put it in a box - with thanks to Farmison.com

Compared to other box schemes Farmison’s prices aren’t much more expensive, but for me I still prefer to be able to fondle my fruit and veg; plus only the cress, cauli and potatoes were from the UK in the foodie box I received. I appreciate that certain products (ie the wonderful lemons from Italy) can’t be sourced in the UK; but for me, even as a foodie, I’d rather fore go most items that are out of season, rather than substitute with those that from a different country (though not those lemons!).

For me, rather than the box scheme, Farmison excels on their meat and dairy; each cut of meat has multiple choices for the consumer, for example there’s four different types of lamb noisettes from North Yorkshire, The Isle of Man, Lancashire and Suffolk. Each entry has details about the farm it’s from, the breed and which chefs in the country use it. You can even click on farm name or the breed and you’re linked to more detailed information. 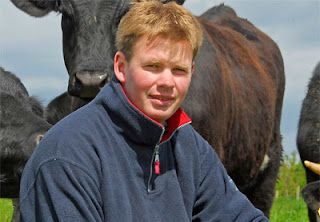 Photo of Abbotts Farm, Yorkshire from their producer section - thanks to Farmison.com

Farmison’s dedication to quality sourcing and care of provenance shines through from their well thought out and well designed site. Farmison are putting choice and power back in the hands of the consumer and that’s a good thing in my book. It might be a little pricey, but I like to think that I'm paying for quality, good husbandry and utter trust in the provenance of the produce I buy. I doubt I'll use the box scheme, but that's just me, however for meat and dairy I'm already there!

Ps - I was sent a box by Farmison, but not in the expectation I'd write super nice things about them - all the thoughts are my own and they haven't seen this piece before I publish it.


Pps - Sorry for the lack of pictures, technology problem.