Unlike the usual no booking malarkey that Almost Famous runs, this night was a) out of their normal Thurs-Sun opening hours/days (exciting! Clandestine!) and b) ticketed (strangely conventional for Famous). Watching Twitter, like I do because I get bored at work/have nothing better to do with my life, the tickets sold in double quick time promting Famous/Fire and Salt to roast two piggies and put on a double sitting.

The premise of the night was turn up, eat pig, leave satisfied - however being an Almost Famous night there was also plenty of chutzpah and theatre thrown in for good measure. Not only did we get to eat pig, we got to see piggy as well - before we tucked in he was wheeled out for us to page homage, straight from the BBQ. Oink oink. 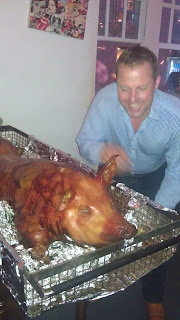 Hey there little piggy, you going to get in my belly?

The pig had been cooking for the past two days in Fire and Salt's traditional southern style BBQ pit (and Southern style doesn't mean like Essex here); basted, tended, cared for, obsessed over (pretty much how I like to be treated) and then the kitchen monkeys at Almost Famous had created some absolutely blinding dishes for us to get wet over (like the state I get in if I'm treated like that piggy...). 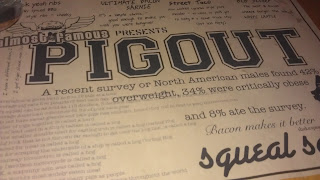 First out  - pork scratchings; well you couldn't have a flithy night of pigging out without the most dirty, salty, crunchy bar snack ever - seemed to get everyone right in the mood as by the time the ribs came out everyone was practically drooling about what was to come - hyped up by the frenetic finger picking of the the banjo player and the skimpy shorts worn by the waitresses (my, they were skimpy!).

First out were Fuck Yeah ribs, totally melt in the mouth - in fact not even mouth as the bones came out in my fingers and just left the spicy, smoky, sweetness of the meat for me to shovel in - needless to say I ate as many of these as I could and greedy nicked any spares that were lying around, baring my teeth if others came near. 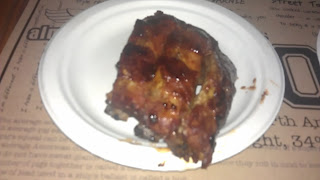 One of the three portions of ribs I manged to gobble

Then a double dish for double fun - on one side, a bacon sandwich with the Famous makeover; basically that finger-lickin' famous ketchup, god I could murder one of these every morning. Then a carnita; a soft little taco filled with achingly tender pork, hot sauce and a lime laden guacamole that lit up your mouth and made your eyes pop out of your head. 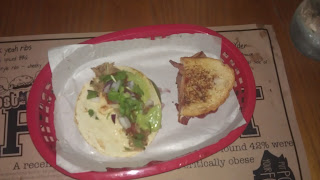 Out came a slider - a mini-burger that was modelled on the eponymous Famous burger but topped with JD maple candied bacon, BBQ onions, baconaise (yeah like there wasn't enough pork on the menu), cheese and BBQ sauce. Mini-burger, but a mighty mouthful.

Then, when I really couldn't fit in any more food and was beginning to feel a little Man Vs Food, out came the pork platter. An overflowing plate of porcine perfection, served on Famous sweet potato and potato fries and accompanied by a selection of sauces and dips, including butter, because we all needed more calories/fat/death in our bodies right then. 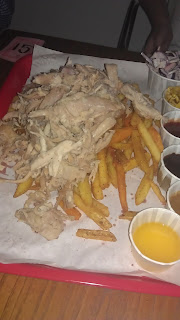 In case I hadn't had my fill of meat, some pork for me to stuff in my (mouth) hole

All the while we porked out the drinks were flowing; the staff were chatting, relaxing and serving the needs of the of us vile gluttons in the true friendly Famous style. I stuffed pork in my mouth, gobbled inordinate amounts of meat, tasted a range of wonderfully thought out flavours and licked my fingers almost to the bone. Evern thinking about it now brings me out in goose pimples.

From the smiles and full bellies of the diners the night was a super success - it's good to see somewhere trying something a little different. As with anything that's put on at Almost Famous you know the crazy amount of dedication and passion that has been poured in to every detail of every dish and at Pig Out, you could definitely taste it.

Ps Keep an eye out on the Almost Famous website/twitter for more food obsessed nights as I'm sure there will be plenty to come.