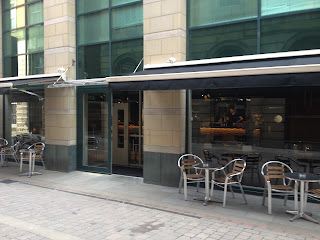 Located on Pall Mall, off King Street – one of Manchester’s more salubrious streets and based on the old Destino’s site (it’s still got the same owner, they wanted to rebrand and thought a cocktail bar would be a great addition to that area of town), Liquorice is an upmarket bar that sports neutral walls, leather banquets and a wood topped bar.

Serving cocktails and drinks, it’s aiming to be an after work place during the week and then a bit more upbeat at the weekend. Their manager Ben Brooks (who was trained by Neil Garner and, claim to fame, was on Come Dine With Me) has designed a cocktail menu that’s inclusive rather than one that alienates people with unknown liquors and bizarre taste combinations; however there’s some still signature flares thrown in for good measure, which will make Liquorice stand out from the crowd. 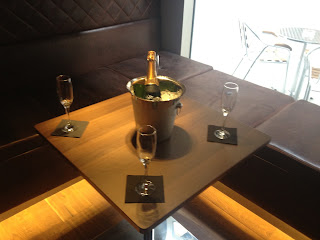 When we visited there was a relaxed after work vibe and we managed to get a seat at the bar; chatting with the staff it was clear that a) they’re a friendly bunch and b) they know what they’re talking about. After sampling some of the more usual drinks I plunged in to that signature cocktail – after all, I am a massive fan of liquorice, so why wouldn’t I?

The sharpness of the orange is toned down by the salty, sweetness of the liquorice – sort of like chewing a fruit salad and a blackjack together, but without the chewy gak on your teeth or diabetes. It’s a stunning looking and lovely tasting signature drink that I think Ben can be proud of knocking up.

Chatting to Ben, the idea is to get the place buzzing and build up the clientele going form strength to strength and just making it a fun place to hang out and get some good drinks – there was even a cheeky hint that they may go on to open other things. If they keep the winning formula of good drinks, good chat and good atmosphere; then I don’t think it’ll be too long before they do that. 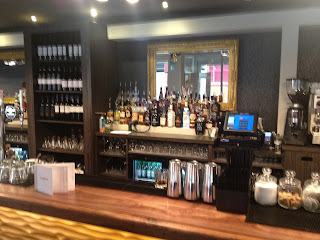 Ps Liquorice is also serving food, so you can line your bellies before imbibing too much (Nosh knows all the consequences that brings!). There’s going to be some old Destinos favourites on the menu such as pumpkin ravioli, seabass and meatballs.

Pps If you go this weekend (17-19th Aug) it's their opening weekend - so expect lots of freebie and fun!
Go and see them, you need cocktails!