Sometimes you have a longing for a proper pub; a pub with dark wood, flagged floors, proper ale on tap and a log fire (ok, the fire was off as it was a hot day, but you're getting the picture). The only thing about a 'proper pub' is that you run a gauntlet with the menu: chicken nuggets, scampi, flabby chips and pickled eggs, if you're lucky.

The Eagle and Child is a cosy pub, especially if you sit near the bar and not in the dining room (book ahead and ask) and features one of the best food menus I've seen in a pub for a while. The food on the menu is mainly from local suppliers and there is a large emphasis on using high-welfare meat and plenty of game, especially on the specials menu (which is very long and actually much better than the bar menu) and also includes meat reared on the farm that also owns the pub (and the farm shop next door).

Being a Sunday the Boy decided that he couldn't let the massive yorkshire puddings being paraded past our table go, so he and the Make-up Artist decided to opt for the traditional beef roast. Myself and Daddy decided that we would kick of the beginning off the season and help the local farmers by ordering the wood pigeon with wild mushroom and pancetta gravy.

The beef roast was a big dish including two different types of potatoes (the boy was in heaven), two big, thick slabs of beef, a massive home made yorkshire and gravy. The roasties were good and crisp, not a patch on Mother's (but then whose would be?), the beef wasn't served pink (much to the boy's dismay), but was soft and well flavoured. And the yorkshire pudding? Large and lovely by all accounts (there was none left for me to try!). 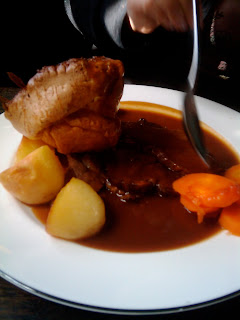 The roast beef (and the boy's hand)

The pigeon was a little more of a cultured affair with three large breasts served pink, only one was slightly dry. The birds had been hung well as most of the meat was soft and had a lovely gamey flavour that some establishments are too scared to highlight these days. The pancetta and mushroom gravy really complimented the rich meat, though was slightly too salty for my taste (but I am known for being particularly fussy with salt). 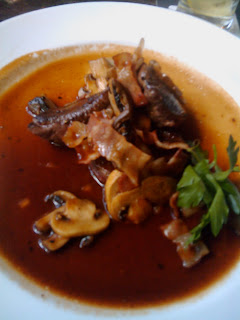 On Sunday main dishes at The Eagle and Child come with a side of veg; this day's being carrots, cauli and ratatouille. The carrots and cauli were just plain boiled, fine with the rest of the dish and had a good crunch left in them. It was good to see somewhere trying to be a bit different with the inclusion of the ratatouille, however it had been overly reduced and was very tinny tasting. Against fish or light chicken dishes this may have been a great compliment, but against the heavy roast and the meaty pigeon the flavours clashed and the ratatouille was so flavourful it almost drowned out everything else. 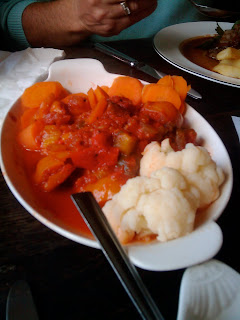 Side veg with the overpowering ratatouille

Again the parading dishes caught the Boy's eye and he couldn't let the apple crumble and custard go. Compared to the mains the puddings at the Eagle and Child weren't up to scratch. The crumble was soft and overly sweet, and I swear the custard wasn't home made. Make-up artist's crannock was a soft dish of cream, oats and whiskey with a few raspberries thrown in. This pudding presented with far too much cream and not enough oats, whiskey or raspberries - more fruit would have lightened the dish up no end and provided a refreshing juxtaposition in what was otherwise a very heavy and disappointing end to a fabulous meal. However compared to the traditional pub puddings of Sara Lee black forest gateaux these were ambrosia (just like the custard).