Another girly day with Mother and stuck for where to try for dinner we asked the Haworth locals, not the usual small north western town type people - the inhabitants of Haworth are far more likely to know the difference between a jambon iberico de bellota and jamon iberico de cebo than which Jedward is which - and after establishing that yes, we have already eaten at Weavers, and no we didn't want to drive up on to the wild and distant moors, then we were pointed many times in the direction of Embers.

Embers is located half way up the quint cobbled street that marks the middle of Haworth and is hard to miss with its cream front and glass covered balcony.

Dining in the middle of the week we were shown upstairs, as the downstairs dining room facing the open kitchen is closed unless it's very busy. However, we were not dissapointed as we were seated in the glass covered terrace - the romance of eating out in the dusk without the chill of the British weather and the nip of the millions of bugs.

The menu at Embers features modern British food such as beef wellington and pan fried duck breast with the influence of countries such as Italy and Thailand.

After a large meal the night before (and a large lunch), (and a cake and coffee), (and chocolates) Mother and I fancied nothing too heavy and what really cried out to both of us was the Little Stew of Crayfish and Mussels, Pernod and Cream topped with Puff Pastry. Although this dish was a starter the staff were more than happy to bring us a larger portion size and only upped the price by a few pounds (rather than doubling it as happens most places elsewhere), and the portion was really very generous. 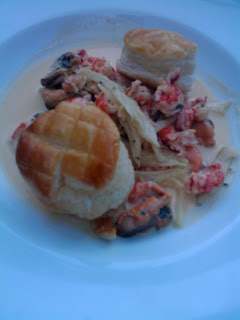 Small stew of crayfish and mussels

The dish was indeed light even though the sauce was all cream. The pernod and some stewed fennel added a wonderful aromatic aniseed flavour that really lightened the dish up. The whole seasoning and flavouring was very carefully and expertly done as I had been worried that the dish would have either been a bit rich from the cream or a little overpowering from the pernod.

Unfortunately I cannot wax so lyrical about the contents of the dish. The crayfish was overdone, chewy in texture and really off-putting, some of the mussels were fine but the smaller specimens had suffered the same fate as the crayfish. Plus the puff pastry was heavy and soft, it seemed somewhat stale and was a real let down to the dish. Thankfully the bread we had been served at the side was crisp and just the right chewiness and proved a great vehicle for conveying sauce to mouth (and unfortunately down the front of my dress as well, Mother was not best pleased!).

In all the dish would have been a roaring success if it hadn't been for a few slip ups letting it down. The flavouring was really special and spot on, so obviously an indication that the kitchen at Embers knows what is doing and because of this I am hoping the overcooking was a mere oversight for that night only (although I really can't forgive them the stale pastry).