After a long day and no sleep the night before there was nothing I wanted other than someone to cook my food, and I didn't fancy one of the boy's accidentally grilled pizzas. Not being too far from Retreat the boy and I decided to give it a go as we had been promising for a while to pop along. 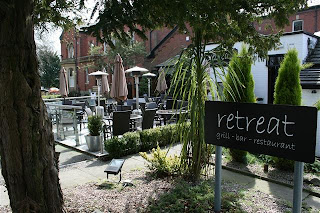 There is nothing more disappointing than arriving at 8pm to find half a restaurant booked out by an accountancy firm with no tables free till at least 9.15pm unless you want to go outside and freeze on the patio. However Retreat's owner (from across the modern, stylish room no less) noticed our fallen crests and within five minutes of sitting outside and pestering the waitress over the possibility of the patio heaters being lit, we were whisked back inside to a thousand apologies about how the table we had magically been found wasn't his best table (more restaurants should remember it's these little touches that makes their patrons feel like the only people who matter in the world).

Sitting at the table it wasn't the worst; it wasn't one of the lovely booths that Retreat is famed for, but it certainly sat both of us and had space  for the food, without being in a draft or smelling of toilets - that's ok in my books.

Having already seen Retreat's menu a few weeks back (we have been promising to go for ages) I was unsure of the style of food as it seemed to err on the side of grilled. To start we ordered some bread as my tummy was rumbling and I swear the boy was almost fainting off his seat. Retreat's bread starter was three large doorsteps of bread; soft, chewy and fresh accompanied by two oils - chili and lemon. I'm not sure about the lemon oil as it tasted of lemon curd, not savoury in the slightest and something I didn't want to eat or even liked, but for some reason was exceptionally moreish, like rubber-necking at a car crash. 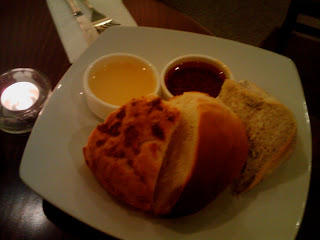 Mains followed and I had chosen the venison and this turned out to be a scrumptious dish (it should have been for £17.95). The meat was very tender, succulent, tasty and just the right shade of pink accompanied by the best carrot and swede mash I have ever tasted in my life (sorry Mother). The dish was served with a pot of honey, an unusual but entirely brilliant addition that I enjoyed dunking my soft meat in.

The boy had chosen duck and asked for it pink - when it arrived it was a little over cooked, but very well seasoned and still very soft, with a lovely chargrilled flavour. The apple puree was slightly sharp really complimented the sweet, rich meat. Overall the whole dish was very tasty, although served with asparagus - I'm not one for serving food with ingredients flown half way around the world when are still in bean season here and there are plenty of other seasonal alternatives that would have gone just as well.

Mains were quite large and we were quite satisfied and full, however the puddings were calling to me with their sweet little song to me (it's only something girls can usually hear). The boy was very upset to learn that all the custard had gone (shock!) so he settled for a coffee. I was having none of that and ordered the tiramasu - Retreat's version would make any traditionalist eat their hat as this was more of a light coffee, chocolaty mousse than the usual layered version. In saying that this was an extremely enjoyable interpretation, beautifully flavoured and quite light (though I still couldn't manage the whole of it!).

In all Retreat is a brilliant little getaway, especially as good out of the city food can be hard to come by unless you are very keen on pubs. The service was brilliant, the food was very good and most of all it sure beat having to cook for oneself.

Ps - Don't use Google maps to find Retreat as it sends to you a Victorian terrace in Horwich where you won't find food, unless the tenant of the house is obliging enough to open her freezer to you. Retreat is in between Lostock and Bolton, peeping out from between the large houses and leafy trees of Chorley New Road.

Cost for one starter, two mains, one pudding, one coffee, one large glass of wine, two beers and one gin and tonic: £76.00